This Vote Should Be Unanimous: It’s Electoral, not Electorial!

Posted on September 21, 2012 by languageandgrammar 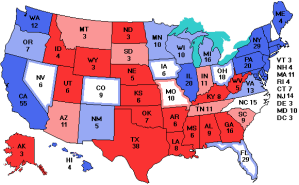 Estimated electoral college votes as of September 21, 2012; image from electoral-vote.com

We’re in the heart of election season, which means many things, one of the most annoying of which is how many people are going to say electorial instead of electoral.

There is no “i” in electoral or electoral college.

Now, of course, if you’re one of those people who believes that a mistake repeated often enough is no mistake–it’s new acceptable usage–then you might think electorial is a word. (Think dictionary.com, where electorial has a definition of electoral.)

P.S. Blue is my favorite color!