Posted on April 11, 2013 by languageandgrammar

Here’s something I wrote in AIS Writing Tips that I thought would work well here.

The late-night shows are in the news again, so as a shout-out to the longest tenured late-night comedian, David Letterman, I thought this month’s tip would replicate Letterman’s old Viewer Mail.

It’s pretty much the same, except Dave’s Viewer Mail was real letters from Late Night viewers, and this writing tip is made of fictional letters based on real suggestions from AIS staff. 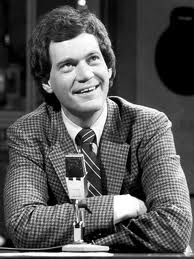 In other words, this is what Writing Tips might have looked like (if it had existed) in 1984.

I’ve always been a big fan of AIS Writing Tips, but I recently heard Teri Garr say “Let me orientate myself.”

Perhaps you should never have Teri on Writing Tips again since she made two egregious errors in one sentence.

Frist, having been in State College many times, I know that the set of Writing Tips is pointed in a westward direction. Since the word orient means to turn to the east, does this mean that Teri turned her back on the audience? Second, isn’t orientate just a grammatically incorrect version of orient?

Bewildered in the (Shields) Basement.

We’ve always said two things: There will always be a place on our set for Teri, and we’ll never leave NBC.

You are correct that orient was originally defined as “to turn toward the east,” but it’s been used in a more general “getting your bearings” sort of way since the middle         1800s.

As far as your other concern, whether it should be orient or orientate, that’s a sticky one. Most standard grammarians (like me!) prefer orient (oriented) to orientate (orientated). “Orientated” just sounds like one of those new made up words that we toss around all the time (like snackables), but according to the big, shiny New Oxford Dictionary that’s sitting on my desk, orientate (orientated) has been in use since the mid-1800s as well. That’s longer than Hal Gurnee’s been around!

I’m going to keep using orient/oriented rather than orientate/orientated, but it looks as if both are technically correct.

The Writing Tips blog has gone downhill since Merril Markoe left, but I’m a devoted fan nonetheless. Can you send an autographed picture of Larry Bud Melman so that it can be incased in my growing memorabilia collection?

P.S. Long live the man under the stairs.

Enclosed is your requested Larry Bud Melman autographed picture. Please ignore the white powder–it’s nothing nefarious–just leftover from when we dunked Dave while he was wearing a suit of Alka Seltzer. The powder is everywhere!

Please note that there is no word “incase/incased.” The word you were looking for was “encase/encased.” In case is always two words, as in “Just in case your letter gets lost in the mail, please don’t send us another one.” Encase means to place in an enclosure.

This entry was posted in language. Bookmark the permalink.